This website and everything that has been noted in his book “The Miracle & Wonders of treatment from Hot Water”, has been revealed upon his personal efforts and various experimentation he went through for many years in one part, and many researches and information that he has been able to collect related to the topic itself in order to increase the credibility of the contents mentioned in the aforesaid book, in the other part.

Hot Water Therapy, including the Therapeutic Methods of Drinking of Hot Water has been a wonderful scientific discovery Dr. Faris ever accomplished. He has himself along with his entire family (his wife Gloria and his two sons Qais & Sami) fully abide with the BICADU (Belief, Implement, Continue, Appreciate and Understand) applications of HOWT, including drinking hot water every day of his life since he personally discovered this therapy in August 2007.

Whereas he and his entire family still continue drinking hot water due to its great health benefits they all have accomplished.

Personally, Dr. Faris was able to cure myself for so many complications and diseases, some of them were considered chronic to the extent they were incurable with either the modern or traditional medicine. Please refer to his testimonies issued by a Medical Committee where it was proven that drinking of Hot Water has completely cured him from various diseases and health complications he was suffering for so many years (Bronchial Asthma, Allergic Rhinitis, low backache (Lumbago) & Attack of Migraine). Till today, he is completely asymptomatic from any health complications, Refer to testimonies –

However, since August 2007 he never used any form of drugs (medicines). In addition, his wife has been completely cured from LDL (Low Cholesterol) that reached very high at 7.441 mmo/l and Diabetes.

Moreover, a tremendous number of People have benefited from Hot Water Therapy and many of them are now completely asymptomatic from their diseases. Therefore, Faris wishes that every Human being will benefit from his Hit water Therapy, including everyone who follows, reads and abides by what has been revealed in this website, his aforesaid book, any future books related to his Hot Water Therapy, and all his social media, You Tube etc.

In addition, simply since water is the only element that no living being can ever live without it, and is the only colorless, odorless and tasteless element that never cause any harm to any living being including Human himself, therefore, Faris does not bear any responsibility toward any Person if wrongly use this discovery.

As the Person who drinks hot water and follows the procedures mentioned in his aforesaid book, is considered a doctor for himself or herself, a volunteer by himself or herself and seeks for the benefits of Hot Water Therapy, for which it is his wish to every Human being.

This note is not pertained to be neither a warning, nor an apprehensive from the treatment. But, for the sake of completing the legal procedures of his said book and any future books, by preventing any wrong intention that may arise from any Person for the sake of achieving his or her personal needs that are completely denied and do not constitute any part of the goals for which this website, social media, You Tube etc, and the aforesaid book have been issued.

Finally, any person who abides the drinking of hot water for whatever reason of any of the reasons that have been revealed in this website and the said book as well, shall be considered a volunteer by himself or herself without any responsibility on the party of the Author, Faris AlHajri-Ph.D.(A.M.) 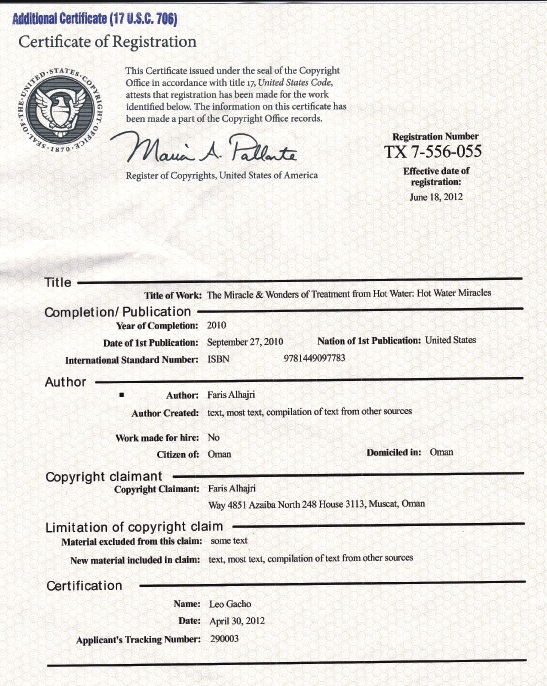 We offer consultations with a Haqua Revitalize practitioner