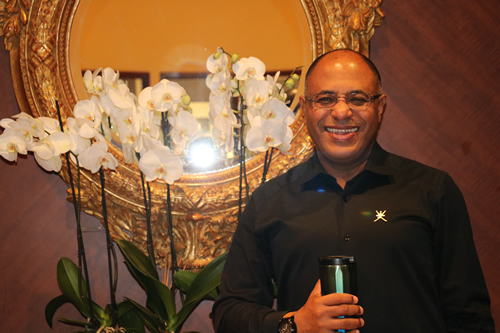 Recognized as one the first leading author in writing about The Miracle & Wonders of treatment from Hot Water, Faris AlHajri-Ph.D.(A.M.) has dedicated his life to demonstrating how every person can truly get cured and reduce suffering by the treatment on Hot Water.

As a well respected author on Benefits of Drinking Hot Water and Water treatment, his advice has given insight to several people. Inspired in peace making, living in harmony, denying all kinds of discrimination, he devoted his life in writing theories related to such topics, he has written more than 150 theories of well being.

Faris AlHajri-Ph.D.(A.M.) is an Omani citizen who was born and spent most of his childhood in Africa anyet strongly influenced by Western cultures. Cross the seven seas to officially marry a Filipina and became a father of two energetic sons, Qais and Sami. Proves that love conquers all and neither race nor religion can drift them apart. Strived to finish an Engineering course and presently working for the Ministry of Housing in Sultanate of Oman as Technical Expert to the office of H.E. the Undersecretary of Housing.

❖ Presented several seminars on The values of well being and its secret for better living- Theories. The second book is on The Miracle & Wonders of treatment from Hot water

❖ The Miracle & Wonders of treatment from Hot Water has helped thousands of people.

❖ Author of the newly sought topics: The Miracle & Wonders of Treatment from Hot water & (The values of well being and its secret for better living-Theeories) Click here for more on Health Benefits on Drinking Hot Water

We offer consultations on Haqua Revitalize® Therapy, for Corporates, group individuals to empower your team and provide ongoing support and guidance as you set goals and make sustainable changes that improve your health and happiness.